Earlier in the week I received a wonderful surprise: The PatternWorks.com catalog for fall (with some wonderful things for winter in there as well. One of the things that caught my eye this time was the Cro-Knit Tension Keeper. This actually seems like an answer to a prayer, especially since I am “encouraging” myself to use the Continental style of knitting for the larger projects because it is faster. Since I am also an extremely loose knitter, I thought this just might help my problem. Actually, the loose knitting isn’t really a problem because all I have to do then is just to change down a needle size. Still, as far as holding the yarn on bad hand days, though rare in number, could help me get through the difficulty of such a day.
Has anyone out there used one of these doowhickies? Is anyone using them now? I am quite curious to know before I put down money on it. I can’t afford to purchase something just on a whim, still, it is intriguing.

Here is the burp cloth I made for a friend’s baby. I am going to have to mail it off, but it is so cute I wanted to share it with everyone!
Going onto the needles next is a little pair of breeches for my niece’s baby, and then the sweater. November is going to roll around here before you know it and I want the package to be in the mail and already there before November. Yeah, I am kind of pushing it, but little things go so very quickly!
I am also contemplating put a sweater on the needles for my DH. If I am diligent it should actually be done by his birthday, 01/31. Right? Yeah, my first attempt at making a sweater is still sitting in there in its bag looking forlorn and lonely. My thinking is: If I begin from scratch with brand new/different yarn, the knitting should actually go quicker, especially since my knitting confidence is a lot higher than what it was so many long months ago. Plus, since obtaining the nifty Options Acrylic Needles from an anonymous giftter for my birthday, I can knit longer than normal!
My only remaining question is – how am I going to get all of the Christmas knitting completed?

I am getting things done.

It has been Monday. All. Day. Long.

AND no one picked up the gift I made for a friend’s baby. This makes me sad and feel just a little odd. I understand time constraints but…. I’ll get over it. I’ll mail it to them!!!!! 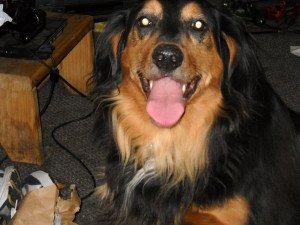 The baby of the family got really sick at the beginning of September. She became lethargic and not wanting to do anything. Several times between September 1 and September 9 we were told she might not make it through the night. She kept surprising the doctors.

It became so scary that we took JoJo to Richmond to one of the best vets I believe I have ever seen, Dr. Taylor at the Barns Mill Road Animal Hospital. He did tests and said she had an autoimmune disease that cocker-spaniels were susceptible to: it caused the body to stop making red blood cells. He gave her a blood transfusion and it seemed that she was going to make it, but she suddenly had a turn for the worse. Dr. Taylor gave her another blood transfusion, but it just didn’t take. JoJo passed away on September 9 around Noon.

Not having her around for the time she was in hospital I came to realize just how much life she brought into our home. She was always loud and ready to play or bark so her voice would be heard. JoJo was Mommy’s girl down to her very core and she was never more than three feet away from me at any given time. When visitors came she was the perfect little lady (usually) and let everyone know she was available for petting and didn’t mind loving you back with her great big brown eyes!

It may sound silly to you, but I had her cremated and she is now sitting over there in her box back here in the office. Hubby said he would bury the box if I wanted him. I haven’t decided on that yet. In some weird way, having her ashes here is like she finally made it back home to me.

For the past couple of nights I have dreamed of her and different puppies, one of which was named Glory.

As you can imagine, the knitting has been both a blessing and a curse. I have baby shower to get ready for this weekend and I still don’t have the burp cloth ready. I have it begun, but there is still a lot of knitting to do on it. Hopefully it will get done, especially since it is also part of the decoration!